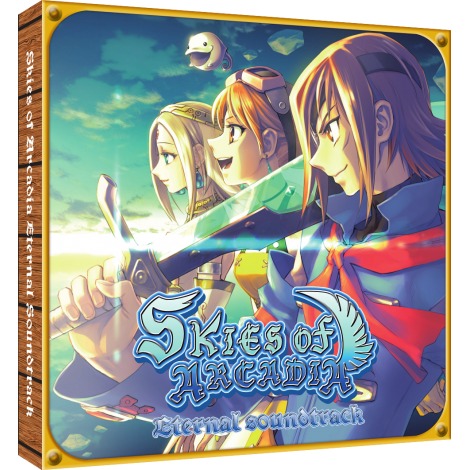 Twenty years after its original release, delve back into the epic journey of Skies of Arcadia alongside Vyse, Aika, Fina and the Delphinus crew with this official reprint of the game's legendary soundtrack!

Composed by Yutaka Minobe and Tatsuyuki Maeda, the Skies of Arcadia soundtrack sets the tone for a wonderful adventure throughout beautiful and varied celestial lands, and plays a crucial part in making the game one of the Dreamcast’s finest titles. It was a technological prowess of its time, thanks to the use of interactive arrangements that changed the mood of the music depending on the land you explored. Some tracks were fully orchestrated and performed by the Skies of Arcadia Symphony Orchestra.

The vinyl edition of the Skies of Arcadia Eternal Soundtrack includes 30 tracks from the game on 3 LP discs, presented within a deluxe package featuring a brand new piece of artwork made especially for this edition by Itsuki Hoshi (original designer of Skies of Arcadia). It features three blue 180g vinyl discs (each with its own illustrated sleeve) and a completely new 24-page booklet, including Itsuki Hoshi’s artworks and new comments from the original team.

To celebrate this unique legacy, the re-release also features two exclusive piano arrangements newly created by the prodigy Ramon van Engelenhoven, including a majestic, 15-minute medley that will let you experience the world of Arcadia with a fresh outlook, under the brand Wayô Piano Collection.

Side  A
A1 Opening Theme
A2 Main Theme
A3 Sky Pirate Isle
A4 Sky Pirate Hideout
A5 Blue Rogues' Theme
A6 Blue Rogues' Ship (Nasrad, Ixa'taka, Valua)
A7 Battle
A8 Bombardment

Side  B
B1 Kingdom of Ixa' taka
B2 Dungeon of the Ancient Temple
B3 Drachma's Theme
B4 The Little Jack (Nasrad, Ixa'taka, Valua)
B5 Battle 2
B6 Boss Battle (Crisis, Opportunity)
B7 The Victory